One more time...the drawing with background :-)

I tried one more time with the 'One Moose' picture, drew the fat moose again and put some Dr. Suess background in. It's looks a little better, but still amateurish. I have absolutely no idea how I'd do the rest of the poem (see below). 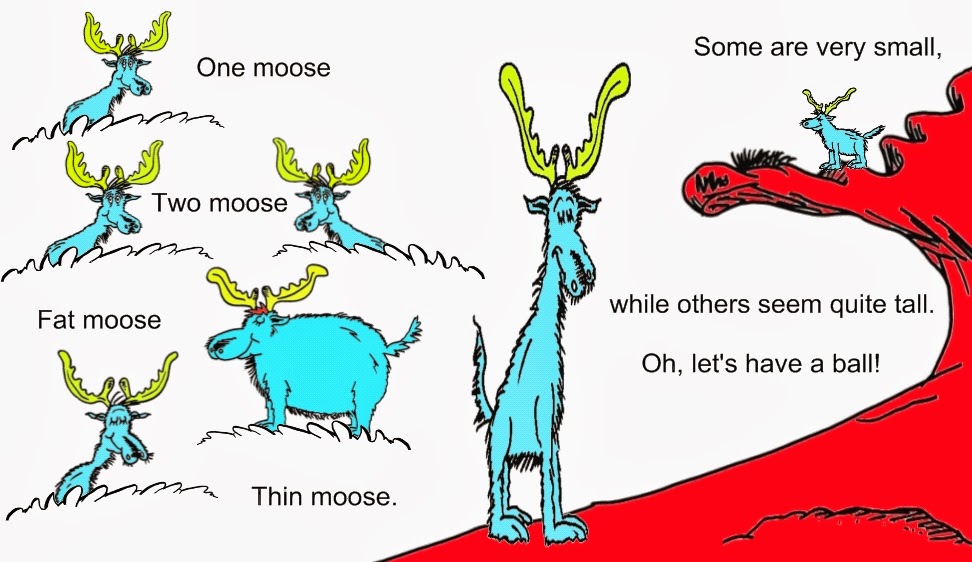 One moose, two moose, fat moose, thin moose.
Some are very small, while others seem quite tall. Oh, let's have a ball!
Some are old, and some are bold. Some have colds and some have mould.
Why do some have colds and mould? I guess it won't be told.
Some are happy, some are snappy. This one has a little nappy.
Here are some who like to chat, here are some who like big hats.
Here are some who like to scat, here are some who have pet rats.
Some have great clothes, others have big toes.
Some like to compose, others, well, who knows?
Some are funny, some have money, some like little furry bunnies.
Some have short tails, some have long nails, some like swimming with the blue whales.
This one's name is Tom, he loves to take his Mom to go and see the Prom.
This one's name is Fred, he loves his comfy bed to rest his weary head.
Why does Fred love his bed? I guess because it's cherry red.
None of them is like the other, they all grew up with diff'rent mothers.
So come along and see the moose, but don't forget the orange juice.