Yes, Radnoti X (Book 2 of my sci-fi Humanity H2O series) is doing quite well! Yet again it received #1 New Release orange banner - for the 2nd time, once when it was released on Pre-Order and now that it has been published!

Gubacsi Dulu also received its 32nd rating... a 1 star rating from the International part of Amazon... thank you whoever you are, you're a dumbass. Probably another trash sci-fi writer trying to make sure my books don't get noticed, or an 'old friend'. It's not nice to receive YET ANOTHER ONE but at least it shows that the book had a strong effect on the reader... one of hate rather than love but at least it made them FEEL SOMETHING. Which is what it's all about.

So, Radnoti X is doing well, and so is Farkas Alpha with its Pre-Orders... 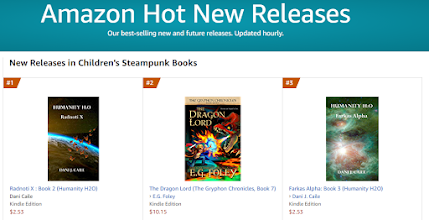 If you'd like to look them over, here's the link to the series!