Yesterday Gubacsi Dulu got an anonymous 5 star rating which brought the total up to 48! Only two away from the magic 50! I might be able to advertise on a few sites if it gets there. Let's break them down 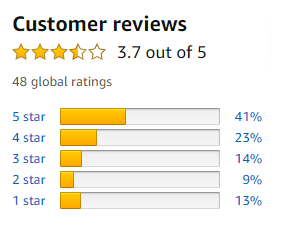 So, exactly two thirds gave the book the thumbs up (4+5 stars), while the other third didn't like it. I'm sure a lot of those anonymous 2 and 1 star ratings are from the 'hidden' 'Trash sci-fi Mafia'! Or a lot of people with TRIGGERS and ISSUES.

AND... Gubacsi Dulu isn't the only book of the series to be hit... Radnoti X got done over by an anonymous 1 star rating... the 'hidden' Trash sci-fi Mafia? There must be a law against this, truly. None of these books in this series deserves a 1 or 2 star rating, these people have ISSUES. Jealousy? A lack of appreciation for style? No brain? Because these books make you think, they were written to do that. I guess not everyone wants to use their brains - they want to continue to live an unchanging life in a voracious society which kills Earth and everything on it.

And, because of these poor ratings, I cannot advertise on the websites as I need an average higher than 4... the Trash scifi Mafia know that. They want to keep intelligent books off THEIR market, they want THEIR readers to stay dumb. Just another conspiracy theory 😂 or real?

So, anyone want to rate Gubacsi Dulu? Or Radnoti X, now that's it's being hit? Or even Farkas Alpha, before it's lone rating is destroyed?