It's a special week! DiSCOUNTS!!!

Not only is Over Reif and Under published

Slaughter Under the Bridge - 99 cents!

Ascension Under the Stars - 99 cents! 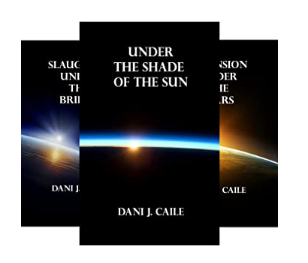 2328AD
Action. Suspense. Intrigue.
These are the continuing chronicles of Brent Bohatch, right out of training camp, who joins the military as a sniper. Relieved to be off the streets of his home city away from the gangs and roaming the universe in his quest to survive, he gets involved in more than just blood and action.
A claustrophobic, subtly humorous, psychotic future of people who no longer know why.
https://www.amazon.com/dp/B08XBJBF6Q
https://www.amazon.co.uk/dp/B08XBJBF6Q
Posted by Dani J Caile at 10:29 AM