Dora the Explorer and the Invasion of the Flying Vampires

For the first time on TIW, there's a duel in a Grudge match, where two writers 'battle it out' for the shrimp!
300 words, and 3 elements: parody of children's literature, Monster Movie title based on your name (mine DJC), and "la bala de plata".
Here's my take on the 'duel'. Stretched the 'literature' thing a bit to Dora the Explorer books, something I have to suffer every other night.
Looking forward to seeing who wins the REAL duel - find it here at TIW 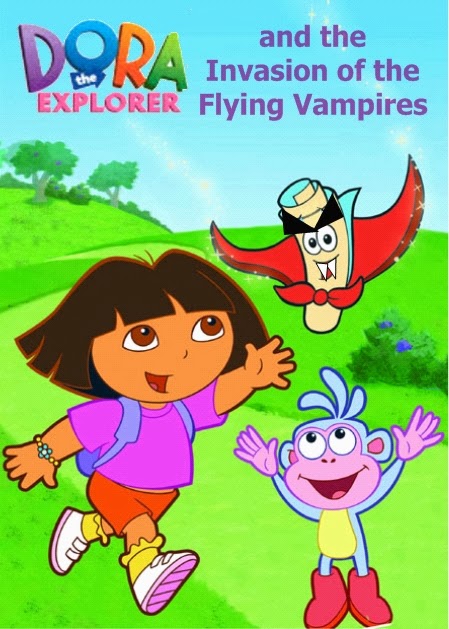 Dora the Explorer and the Invasion of the Flying Vampires
(actually, this is how I read the books, but hey...UPDATE: a rule I saw just now was that the title must have the Monster Movie title and the story be about the title...well, I changed it right now so it does :-))


Hola! I'm Dora and this is my friend, Gucci. Today we're going to my Uncle Vlad's birthday party on Monster Hill. I have some blood sausages as a present. His favourite! Delicioso!
Oh no! Swiper is trying to swipe the blood sausages! Let’s stop Swiper! Say "Swiper, no manipulating the GDP and implying that the inflation rate is below 1% when it’s clearly closer to 20." Thanks for helping us stop Swi…oh, he did it. Oh, well.
Now, how do we get to Uncle Vlad’s castle on Monster Hill? Let’s ask Map. Say "Ma…!" Map has gone, but what luck! Gucci has found a sign which says "This is the way to Monster Hill". Excelente! Vámonos!
We’re at the foot of Monster Hill! And here is Isa the iguana! She is reading a book, ’Invasion of the Flying Vampires’. She looks worried. Isa is Spanish. To say "hello" to Isa, we say ’Hola’. Let’s say ’Hola’ to Isa. Hola, Isa. Oh dear, she ran away.
We made it to Uncle Vlad’s castle! But look! There are some flying vampires circling above us in the sky! It's an invasion! Can you count how many there are? Let’s count in Spanish! Uno, dos, tres, cuatro, cinco, seis! Six flying vampires! Can you see something in Backpack which can kill them? Yes, that’s right! Silver bullets! To say "the silver bullet" in Spanish, we say ‘la bala de plata’. Say "La bala de plata?". Yay! We did it! The flying vampires have flown away! Excelente!
Here’s Uncle Vlad. He says thank you for the blood sausages, they are ‘Delicioso!’. He says we are just in time for the start of his birthday party! Thank you for helping us get to Uncle Vlad’s party and stopping the invasion of flying vampires! We did it!