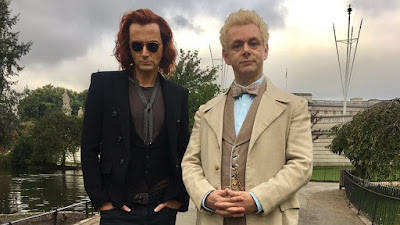 After one of my books was compared to Neil Gaiman's work, I researched and found that he'd beaten me to the punch by two decades, what with Lucifier, demons and angels, etc. He even has a mention at the beginning of each episode of 'Lucifer', a great little silly/shallow series - it's fun to watch, though its messages are... lacking.
Anyway, it's Good Omens I'd like to write about, which was finally put on film by Amazon (and not Netflix as those protesting against it think). Neil Gaiman co-wrote it with Terry Pratchett. I was a fan of Pratchett when I was a teenager.
Crowley and Aziraphale, demon and angel, lead us through, with occasional flashbacks in the history of humanity, the last few days before the expected Apocalypse where the Anti-Christ is revealed and the final fight between Heaven and Hell begins and Earth is destroyed.
Unfortunately, Crowley and Aziraphale have become attached to Earth after falsifying their reports of work for thousands of years, and do all they can to stop this happening.
The TV series is entertaining, as with anything Pratchett, when it focuses on its two main characters, with all those around as merely 'cardboard cutouts', though there are a few other characters that do well from the series, namely Anathema (descendant of the witch Agnes Nutter), Newton Pulsifer (descendant of the man who executed Agnes Nutter), Shadwell (BRILLIANTLY played by Michael McKean) and Madame Tracey (Shadwell's landlady).
From a British perspective, Crowley and Aziraphale are like a 1950s platonic gay couple. As for the 'world' built within the book/TV series, it is unbelievably similar to my own from my first 4 novels, though I have never read Gaiman's work up until now and Pratchett's Discworld novels were different to this.
Good Omens is one of the best things out there in TV land at the moment, though I was actually expecting more from it. The jokes/humour seemed... overdone or overinflated, much like the jokes in Upstart Crow, the British TV 'sitcom' series about Shakespeare. I'll leave that for another time.

So, because of this I might be back to writing...