Dear Liz Truss, Trickle Down Economics Doesn't Work! But you already know that, don't you.

Back on the political trail... let's try something British.

As soon as she became the UK's Prime Minister, Liz Truss stated she 'favours the idea of trickle down economics'. What a surprise.

It was proven that it doesn't work back in the 1980s with Reagan in the USA and Thatcher in the UK - I lived through that in the UK, it wasn't pretty. Give the rich tax cuts and they'll stash the money for themselves, not invest it to create new enterprises to hire more workers. Even the IMF says it doesn't work, and I think they would know just a little bit about money.

So why is Liz Truss in favour of something that doesn't work? Other than clutching at straws after Brexit (a xenophobic nationalistic ad campaign against a growing influx of migrants disguised as a planned political withdrawal of the UK from the EU). I think you should ask yourself where Truss' idea is actually coming from.

I love this quote from the late Robin Williams (one of the greatest humans to ever live). 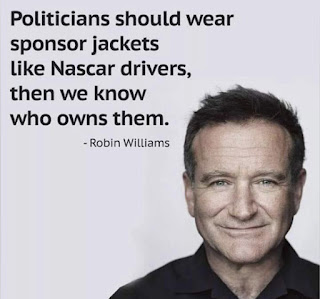 As Robin was American, he could clearly see how money controlled politicians. The Republican party since Reagan has been the worst example of corruption so far in the political history of the USA.

So, the Conservative party in the UK (the equivalent of the GOP in the USA)... who is pulling their strings? Those same rich few who have the money and the power to 'persuade' them to implement laws which benefit themselves. For example, trickle down economics (actually a term used in criticism). You think the UK and the USA are democracies? You think your vote counts?

Trickle down economics doesn't work. But you already know that, don't you."

Next stop... Russia and the Ukraine invasion...