Yes, today's rant is about Russia, or more to the point, Putin. He's just a disgusting pig. Why invade Ukraine? It's quite easy if you research... go and watch this video, it's well worth it..."Why Russia Invaded Ukraine"

If we cut out the bullshit that is 'the threat of NATO, the historical borders of Russia' and the liberating of 'their' people, you're basically left with the usual oil and gas. Ukraine has so much of it untapped, it can seriously hurt Russia's position in the market, which is why Russia wants Ukraine so badly.

The oil and gas was found back in 2012, but Ukraine was led by a Putin puppet, so it wasn't a problem, in fact, a bonus. Then Zelensky got in and Russia took Crimea in 2014 by flying in a bunch of paratroopers and holding those politicians who opposed them there with a gun to their heads until they signed it over to Russia. Now they're trying to do the same with the two regions Luhansk and Donetsk, and now also Kherson and Zaporizhzhia with phoney referendums.

You see, Russia has to take the oil and gas to stop Ukraine being a financial threat as this market is Russia's main export. A war is just as good because Ukraine is using all their time, money and men to defend their country rather than take out these riches. Russia also has a big problem as mentioned in the video above. In terms of manpower, this is the only time they can do something like this, especially with the mobilization. Russia's population is dramatically declining, so in say 20 years time, they wouldn't be able to do this.

But how can anyone attack another country in the 21st century? Well, Putin the pig did. He thought 3 to 5 days and the country would be his. The fight is now on Day 222! Ukraine has done and is still doing something incredible. Here is a picture of a true hero, Zelensky. 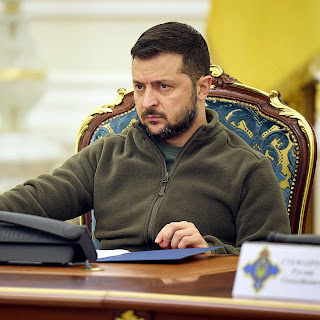 If you'd like to keep up-to-date with the war, I've found this Ukrainian to be extremely informative...Denys Davydov

Stop it already. Get the hell out of Ukraine. Pay for your atrocities and sort out your own country filled with greed and corruption."